Breaking Up with Evan

On September 29, 2009, Samoa was devastated by a tsunami that killed many. On December 13, 2012, Samoa was rocked by Hurricane Evan which has killed three and left eight more missing. I moved to Samoa in October of 2010, a year after the tsunami. I left Samoa on November 17, 2012, almost a month to the day before my very own beachfront fale was damaged by Evan. I escaped both Samoan tragedies unscathed. However, it seems I may have left my heart in that eternal Samoan summer.


Since I’ve returned to Minnesota I’ve done a little research about the tsunami that hit the south side of Upolu. Little did I know the damage it caused. I didn’t know how many people (including tourists vacationing in paradise) were killed. I didn’t know that one of my closest friends, Tele, saved a woman’s life or that he almost died himself. I didn’t know that one of my favorite places in the world, Taufua Beach Fales, was literally washed away. Then just a few weeks after I said tofa soifua to Samoa, nature decided to hit Samoa again. This post is about what it’s like to not be where you want to be, to not be with people you care about, to check Facebook too many times a day for updates, pictures, anything letting you know that your November goodbye wasn’t officially the last goodbye you would ever have with that place and those people.


Un-eloquently, it’s hard to be here and not there. Readjustment is hard. Being in cold, boring Minnesota is hard. Give me hot, boring, everyday Samoa. That boredom now doesn’t seem so boring. There was something about the adventure that was the Peace Corps that I miss every day. I see group 84’s (the newest group of Peace Corps volunteers) pictures online and I’m jealous. I’m jealous that they are just starting this adventure and that my life is utterly unexciting now with no solid plans for the future and the feeling that I’m not living a life anymore, the feeling that I’m just biding my time. The feeling that I’m not doing anything with my life anymore. It’s tough and I’m sure it’s what a lot of Returned Peace Corps volunteers feel. Perhaps my feelings are all the more poignant because I evolved from being a person who hated Samoa to someone who just wants to get back there. I think my fellow volunteers and some close friends back home who kept in touch over the last two years would be surprised about my feelings. Even as of last September I was still pondering whether or not going to Samoa might have been the worst decision I ever made. It wasn’t. I can say that now with 95% certainty. With all the drama, pain, and tears I experienced, I wouldn’t trade it for a happier, vanilla experience. Pieces of my heart still seem to be scattered throughout Samoa. Thankfully, those places and those people all seem to have fared well throughout Cyclone Evan. Everyone is alive, even though it seems that every fale has been damaged (including my own).


Moving on and readjustment will happen once I’m finally distracted again by my own life. After washing my clothes in my Samoan host family’s washing machine, I would hang up my laundry on my clothesline mere feet from the South Pacific. Leaving Samoa is sort of like breaking up with someone. Cheesy, right? But true. These next few lines from a break-up poem fit so poignantly.


And I give up the ghost that lives in them.


Evan, you did not make the ‘moving-on’ process any easier.


Most of the following pictures come from Seti Afoa’s Facebook page, a man who has done an incredible job keeping Samoans abroad updated through photos. And yes, ou a’u teine Samoa taimi nei. (I am a Samoan girl now.) You can’t live in a place for two years and experience some of the most extreme emotions without becoming attached to a place. A few photos I took myself. Other photos come from everyone’s friend, Google.

This is a link to a video taken by Kyle Kincaid, an RPCV currently living in Samoa. His village was Sauano, just up the mountian past Falefa. The video starts about 1/4 of the way into Falefa and goes over the bridge at Falefa Falls. http://www.youtube.com/watch?v=ajFOaLuoeB0 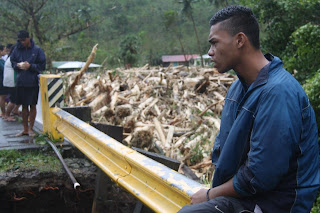 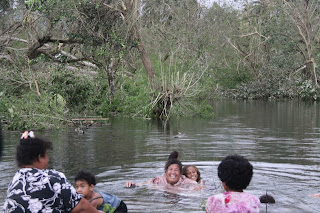 This blog chronicled my adventures as a Peace Corps volunteer in Samoa from Oct. 2010-Nov. 2012.

Who Knew I'd Ever Have a Disclaimer

The contents of this website are mine personally and do not reflect any position of the U.S. government or the Peace Corps.